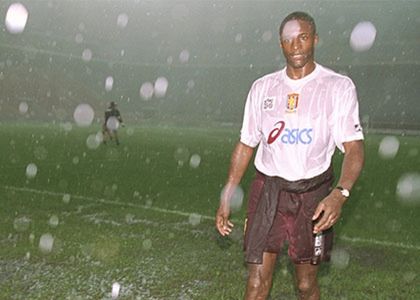 John ‘Fash’ Fashanu was one of the most recognisable football players of the 1980s and 1990s. With a career in football beginning at Norwich City in 1979, John turned professional two years later, making a number of league appearances for the side after promotion to the First Division. A compelling and hugely passionate sporting personality, Fashanu will entertain guests as a football speaker and guarantee that your event is a resounding success, making him one of the most desirable football speakers on the circuit.

Having started his career at Norwich City before briefly going on loan to Crystal Palace, John eventually moved to Wimbledon FC in 1986 for £125,000. John played a fundamental role in the club’s push to gain promotion to the First Division. With the side becoming a First Division authority within a decade from being elected to the Football League, John was part of an exciting squad that were taking large clubs by surprise, finishing sixth in the league in their first season in top-flight football. Discussing the drive and determination needed to achieve this during talks as a football speaker; John is an enthusiastic personality that seeks to instil key attributes for success in every audience member.

In 1988, Fashanu helped Wimbledon win the FA Cup, beating Liverpool in a final that was billed as a “rags versus riches” affair. During his time at Wimbledon, Fashanu scored 126 goals. His best season was 1990–91, when he was the First Division’s second highest scorer with 20 goals as his side finished seventh. A member of the notorious Crazy Gang at AFC Wimbledon as a representation of theirs and Fashanu’s aggressive and physical style of play.

Leaving Wimbledon for Aston Villa in 1994 for a fee of £1.35 million, John again impressed with his strength and attacking style of play. Unfortunately, during an away game at Manchester United in 1995, John snapped his knee ligaments after a strong tackle from Ryan Giggs. Fashanu was forced to retire at the end of the season. Recalling anecdotal tales as a sports speaker during events, John explains some of the key moments of his career, letting guests in on things the cameras may not have caught.

After retiring from professional football, John embarked on a successful media career, presenting the UK version of Gladiators, becoming well known for his catchphrase of “Awooga!”. John has also appeared on I’m a Celebrity… Get Me Out of Here! – coming second in the series. A wonderful TV presenter, John has extensive experience in front of the camera, making him ideal for future productions as well as assisting his polished performances in front of audiences as a football speaker.

With two full England International caps to his name, John Fashanu was also eligible to play for Nigeria and since retiring he has expressed regret in not being able to do so. Now the host of Deal or No Deal Nigeria, airing on M-Net Africa, Fashanu has turned his efforts to punditry and TV appearances since his retirement along with becoming involved with the Nigeria Football Association. In 2003, he became the manager of his own Sunday league football team Fash FC as part of a television reality show, further emphasising his appeal and popularity within the media.

A true entertainer who has enjoyed a host of experiences and dealt with a tremendous amount of adversity within his life and career, John provides an incredibly inspirational and motivational account as a football speaker in truly compelling fashion. John Fashanu is certain to be a wonderful addition to any event as a football speaker.

To book John Fashanu to make a personal appearance at your corporate event, function or conference, simply contact the Champions Football Speakers agency by filling in our online contact form or by calling a booking agent directly on 0207 1010 553.