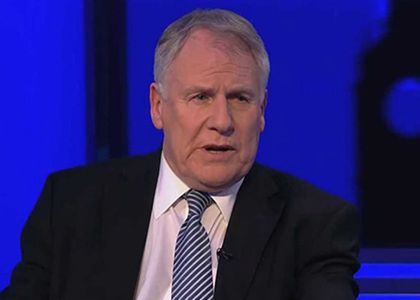 A hugely successful footballer as both a player and manager, Joe Royle has enjoyed a career in the thick of English football, experiencing the trials and tribulations as well as the success of becoming one of the best in their field. An ideal football speaker, Joe can give a first-hand insight of professional football to audience members, making his time on stage both compelling and intriguing.

Playing for the Liverpool Schoolboys team, Joe Royle attracted a huge amount of attention from the likes of Manchester United, however he signed for his home club of Everton, making his debut at the young age of just 16, a record he would hold almost four decades as the youngest debutant. The top goal scorer at Everton for five seasons, Joe made 270 appearances in total, scoring 119 times. A fan’s favourite, Royle was a consistent and effective striker, proving to always be exciting and exhilarating to watch. Talking about how he achieved peak performance on a regular basis during his playing career as a football speaker, Joe has some valuable lessons learnt from a career in professional sport that can be applied to business and social environments alike, making him a highly desirable football speaker.

Bought by Manchester City for £170,000 in 1974, Joe claimed further honours and success by winning the League Cup with the Manchester side just two years after signing. With other spells with clubs including Bristol City and Norwich City, Joe was unfortunately forced to retire aged 33 due to a tragic knee injury, however his career within professional football was far from over.

Joe moved into management and took the reins at Oldham Athletic in 1982, spending twelve years in charge of the side, Royle led the team to the First Division and fought off relegation on numerous occasions to keep them in the newly formed and prestigious Premier League. Moving to Everton as manager in 1994, Joe guided the side to FA Cup Glory in his first season in charge making an instant impact. Leaving the club three years later, Joe went on to join Manchester City in the midst of a relegation battle that saw the side drop down to the second division, only to be inspired and motivated to gain promotion a season later via the playoffs. Joe breaches topics of management and leadership during talks as a football speaker, delivering valuable advice discovered from trials and tribulations of football management.

Enjoying spells as manager at both Ipswich Town and Oldham Athletic between 2002 and 2009, Joe became a footballing consultant for Norwich City in 2014, proving his knowledge and skill in management roles is always in demand.

A wonderful personality at events, Joe enjoys engaging with guests, answering question and being part of photography sessions. A personality of good nature, the former England International is a patron of Zöe’s Place Baby Hospice, a charity for sick babies and young children. Having addressed a multitude of audiences as an after dinner and football speaker, Royle’s calm nature and polished performances in front of the microphone are sure to impress. Joe Royle is the ideal football speaker for any event.

To book Joe Royle to make a personal appearance at your corporate event, function or conference, simply contact the Champions Football Speakers agency by filling in our online contact form or by calling a booking agent directly on 0207 1010 553.