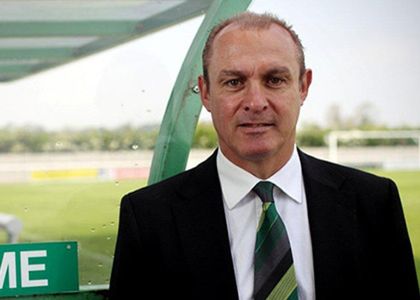 Born in Belfast in 1959, Quinn embarked upon his football career in 1977 and played non-league football for several years before joining Swindon Town in 1981; in the first of what Swindon Town after his retirement, working as their player-manager from 1998 until 2000 during which time he worked prolifically as a football speaker for the club.

Alongside his time with Swindon Town, Quinn was also known for the brief seasons he spent at Blackburn Rovers, Leicester City and West Ham during the 1980’s and into the 90’s. Scoring more than 200 goals in the Football League, Jimmy Quinn was a successful and popular player, whose work as a football speaker, was undertaken during his time as a professional player where he often attracted impressive crowds who applauded him for his entertaining and enlightening presentations.

Also boasting twenty-two goals scored in forty-six appearances in the FA Cup, Jimmy Quinn retired as a playerin 2006 after almost thirty years as a striker. Following his retirement, Quinn went on to manage numerous teams across the UK including Reading, Peterborough and Bournemouth, his greatest successes as a manager include achieving the runner-up position in the Division One title with Reading in 1995 and seeing Shrewsbury Town promoted to League Two following a successful Conference National campaign in 2003/04. Jimmy Quinn rounded off his managerial career with Nantwich Town whom he had also played for during the 2005/06 season, eventually retiring to become a dedicated football speaker in 2013.

Northern Ireland’s top goal scorer with 12 goals and more than 40 caps for the national side Jimmy Quinn remains hugely popular both in England and Northern Ireland. In a career that personified longevity, Quinn’s role as  player-manager saw him make appearances at the age of 40 very aptly wearing the number 40 during these appearances and at the age of 38 was still performing at a very high level being elected in the PFA Third Division Team of the Year. A true winner, Quinn was involved in five promotion winning campaigns during his career within football and won the 1993-94 Division Two Golden Boot.

Having represented 20 teams as a player and manager 8 different teams during his career within football, Quinn benefits form an extremely diverse and distinguished knowledge and understanding of football within a variety of environments and surroundings providing him with unique and insightful experiences that he eloquently discusses in his performances as a football speaker. An almost unrivalled number of engagements and interactions with different clubs has allowed Quinn to accumulate and identify the key elements and ingredients to success within football that are transferable into all walks of life as well as the adversity and resilience required to deal with the trials and tribulations in life and football.

Jimmy Quinn is a motivational and inspirational personality who is certain to make an impact and impression on his audience at any event as a football speaker across the UK.

To book Jimmy Quinn to make a personal appearance at your corporate event, function or conference, simply contact the Champions Football Speakers agency by filling in our online contact form or by calling a booking agent directly on 0207 1010 553.