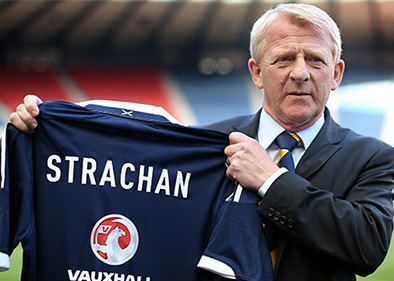 He has managed Coventry City, Southampton, Celtic and Middlesbrough. In club football, he played 635 league games, scoring a total of 138 goals, playing 21 of 25 career seasons in either the English or Scottish top-flight. In international football, Strachan earned 50 caps, scoring five goals and playing in two FIFA World Cup final tournaments, Spain 82 and Mexico 86. Strachan retired from playing in 1997 at age 40, setting a Premier League record for an outfield player.

A right-sided midfielder, Strachan made his senior debut in 1974 with Dundee before moving on within Scotland, to spend seven seasons at Aberdeen. He first played for the Scotland national team in 1980. Whilst at Aberdeen, Strachan won multiple domestic league and cup honours in the early 1980s, as well as the 1982–83 European Cup Winners' Cup and 1983 European Super Cup. Moving to England, Strachan won the 1985 FA Cup Final in five seasons with Manchester United, before spending the next seven seasons as club captain at Leeds, winning the 1989–90 Second Division and 1991–92 First Division league titles.

He played his last game for Scotland in 1992 while still at Leeds, and then moved to Coventry in 1995 for a final three seasons, as a player-coach. Strachan became full-time manager of Coventry when the incumbent Ron Atkinson was appointed as Director of Football. After five years in the job, he was sacked in 2001, when Coventry were relegated from the top-flight for the first time in 34 years. However, he immediately returned to the Premier League with Southampton and guided the "Saints" to the 2003 FA Cup Final – where they lost 1–0 to Arsenal.

Strachan resigned from Southampton in 2004 and took a 16-month break from management before returning to Scotland to become manager of Celtic in the Scottish Premier League. With Celtic he achieved three successive league titles and other domestic cup wins, before resigning in May 2009 after failing to win a fourth title. Strachan was named as FWA Footballer of the Year for the 1990–91 season while at Leeds.

He was also named Manager of the Year in Scotland several times by writers and players while at Celtic. In 2007, Strachan was inducted into the Scottish Football Hall of Fame.

When at corporate events, Gordon is known to cover the following topics:

To book Gordon Strachan as the football manager for your corporate event, function or conference, simply contact the Champions Football Speakers agency by emailing footballagent@championsukplc.com or by calling a booking agent directly on 0207 1010 553.