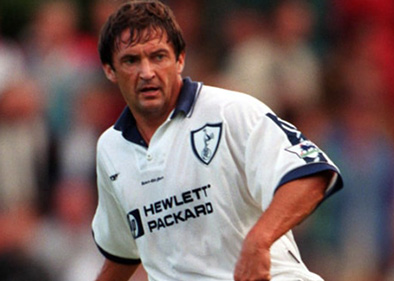 Tottenham Hotspur legend Gary Mabbutt MBE was one of the most respected football players of his era. an English former professional footballer who made more than 750 appearances playing for Bristol Rovers and Tottenham Hotspur, and won 16 caps for the England national team. He was most regularly seen in central defence but was a versatile player who excelled also in midfield.

Enjoying a sixteen-year spell at Tottenham, Mabbutt was a fan’s favourite, captaining the side for a total of eleven years also. A regular feature in the England squad as well, Mabbutt’s extremely reliable performances played an elemental role in both his domestic and international football career. A wonderful sports speaker for events, Gary engages with guests to give them an insight into his time in top-flight football.

After a three-year spell at Bristol Rovers at the start of his career, Mabbutt joined Tottenham Hotspur in 1982. Winning the UEFA Cup with the side in 1984 as well as the FA Cup in 1991, Gary’s seventeen seasons with the club were both successful and consistent. Discussing what is needed to perform at this elite, level Gary delivers useful advice as a football speaker that can be related to both sporting and business environments.

He suffered a broken leg on the opening day of the 1996-97 season and did not return until the following campaign, at the end of which he retired from playing after 16 years at White Hart Lane. By this stage, he was the club's 2nd longest-serving player. His final appearance for the club came against Southampton on the last day of the 1997-98 season.

A fine ambassador for the sport, Gary had to battle diabetes during his playing career, yet still managed to turn out each week and perform to the very highest of levels. Despite never winning a league medal, Mabbutt is widely considered to be one of the most revered players of the premier league of both the 1980s and 1990s.

Mabbutt has type 1 diabetes, and became an icon for many children with the condition. He famously appeared on the BBC's children's television programme Blue Peter where he demonstrated injecting insulin into an orange to show how he dealt with his condition on a daily basis. In 2013, Mabbutt had surgery to save his left leg, following a bout of peripheral arterial disease, brought on by his diabetes. Following the surgery, he can no longer run or kick a ball.

An ideal football speaker or event host for functions, Gary Mabbutt is a compelling character who has enjoyed a lifetime in football, giving him a number of wonderful anecdotal tales to call upon during talks as a football speaker.

To book Gary Mabbutt to make a personal appearance at your corporate event, function or conference, simply contact the Champions Football Speakers agency by filling in our online contact form or by calling a booking agent directly on 0207 1010 553.