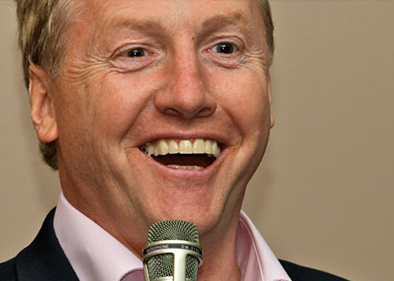 Best known for playing at West Ham United and Celtic, Frank McAvennie is a prime example of the rewards that can be earnt from hard work, determination and talent. Winning the Scottish Football Premier Division in 1987-1988, Frank is a celebrated professional footballer who can deliver an insight into the professional game at any occasion as a football speaker.

Having joined St Mirren aged 20 in 1980, Frank’s debut came against Airdrieonians in the 1981-1982 season. In 1982, he was named Scottish PFA Young Player of the Year and over the next five years, Frank would make 135 appearances for the club, scoring 48 goals. Describing how he achieved peak performance from an early age, Frank is an ideal football speaker for both business and social events.

McAvennie’s strong form in the Scottish league had begun to attract a plethora of attention from English sides. Frank agreed a fee of £340,000 with West Ham United in 1985. Moving positions whilst he was at the club, McAvennie was happy to play upfront as a striker as well as in his more natural midfield role. Frank would go on to form a formidable strike partnership with Tony Cottee, scoring 46 league goals between them in just one season. In his first season, he helped West Ham to their highest ever final position in English football when they came third. His 26 goals in the league was only bettered by Gary Lineker. A compelling football speaker, Frank’s enthusiasm for the game is obvious.

Frank moved to Celtic in 1987 for £750,000, finding new form at Parkhead to score 15 goals in his first season whilst winning the Scottish Premier League and Scottish Cup. One of the high-points during the season for McAvennie were his two goals in Celtic's 2–0 win over Rangers in January 1988. The Cup Final in May was particularly memorable for McAvennie as he scored two late goals to beat Dundee United 2–1, the winning goal coming in the final minute.

However, two years later, Frank requested to be transferred back to West Ham United. Frank signed back on with the London club for £1.25 million in 1989, reuniting with the United fans who loved him for his consistency and exciting style of play on the pitch. During this spell, West Ham won promotion from the Second Division and reached the 1990-91 FA Cup semi-finals.

Frank enjoyed his second spell at the club before moving to a multitude of clubs towards the end of his career, including Aston Villa, Celtic, Falkirk and St Mirren. Scoring 136 in Scottish and English leagues during his career, McAvennie was hugely a successful player. McAvennie was called into the Scotland national team late 1985 for the World Cup qualifying play-off with Australia at Hampden Park on 20 November, he went on to score on his debut. Having been called up to the Scotland national team for the 1986 World Cup, under interim national coach Alex Ferguson. He made two appearances in the World Cup in Mexico and won five caps for Scotland.

An ideal personality for events as a football speaker, Frank will engage with guests and ensure everyone gets a feel for what it is like to step onto the pitch of a professional football match at your event. A lavish career in which his lifestyle was the inspiration for a character played by Jonathan Watson in the Scottish comedy TV programme, Only an Excuse?, McAvennie is certain to entertain guests at your event through stories about all aspects of his footballing life and the lifestyle that came along with it, an experience Frank relished and portrays in a marvellously amusing fashion. Frank McAvennie is a wonderful football speaker for your event.

To book Frank McAvennie to make a personal appearance at your corporate event, function or conference, simply contact the Champions Football Speakers agency by filling in our online contact form or by calling a booking agent directly on 0207 1010 553.

To book Frank McAvennie to make a personal appearance at your corporate event, function or conference, simply contact the Champions Football Speakers agency by filling in our online contact form or by calling a booking agent directly on 0207 1010 553.