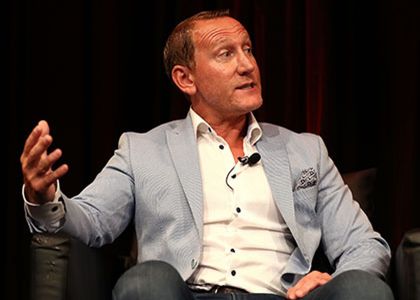 Ray Parlour is an English former professional footballer who played as a midfielder between 1992 and 2007. Parlour spent his career playing for Arsenal, Middlesbrough, Hull City. During his Arsenal career, Parlour was affectionately was nicknamed “The Romford Pelé”. He enjoyed the most prolific period of his career whilst at Arsenal during the 1990s and early 2000s. The midfielder amassed 400 caps and scored 22 times, all of which came during his time at the Gunners. Calling an end to his playing exploits in 2007, Parlour has since forged a hugely reputable career as a pundit, predominately on radio with BBC Radio 5 Live and talkSPORT. A favourite amongst fans largely due to his high energy and electric personality and performances, his popularity as an after dinner speaker and football speaker is phenomenal.

Ray Parlour’s 14 year stint with Arsenal spring boarded him into the limelight, initially starting his career at the club as a trainee in 1989, and made his debut for the Gunners against Liverpool in 1992. Parlour began as a bit-part player for the next few years and was more noted for several disciplinary problems such as a run-in with a Hong Kong taxi driver while on tour, a story he tells during his performances as a football speaker.

Parlour only fully developed as a player after the arrival of Arsène Wenger as manager in 1996, he became a regular fixture playing on the right-wing or in central midfield for Arsenal. In 1997–98 Arsenal won the Double and Parlour proved instrumental. He was man of the match in the Gunners’ FA Cup Final win over Newcastle United that season along with the Premier League winning campaign.

Parlour continued to enjoy success with Arsenal for another four years winning another Double in 2002, but generally received little acclaim in the media compared with many of his more illustrious Arsenal teammates, especially as he was almost constantly living in the shadow of Patrick Vieira for much of his time at the club. He finally claimed his place in the spotlight with a 30-yard strike to open the scoring in the 2002 FA Cup Finalagainst Chelsea, which was famously pre-empted by Soccer AM’s Tim Lovejoy with “Oh, it’s all right, it’s only Ray Parlour.”

Many Arsenal fans believe that Parlour is one of the most under-rated players of his generation, he holds Arsenal’s all-time Premier League appearances record of 333 and his time at the club brought 3 Premier League titles, 4 FA Cups, 3 FA Community Shields and the Europa league. Often gifted the captaincy, as a testament to his stature and leadership qualities, Parlour was still very much over looked when it came to crediting players for the proficiency of Arsenal throughout those years; a silent assassin who quietly worked hard for the team without any personal glory or accolades, only was it when he departed Highbury that people begun to stand up and realise what he did for the team. His incredible work ethic and the ethos he set at the club has improved his suitability as a football speaker, specifically in attending events as an after dinner speaker.

Parlour made his England debut in 1999 and eventually won 10 International caps. Deemed to have been under-utilised at International level, he made just 10 appearances despite his continuously prolific performances domestically, once again highlighting how Parlour was overlooked yet never let it affect him in his undeniable quest to achieve as much as he could and improve every day.

A thoroughly accomplished career, Ray Parlour quietly and efficiently got on with his job without any trouble or commotion. A role model to all young aspiring midfielders, Parlour is an excellent motivational football speaker and sports speaker; his distinguished selfless nature and never ending attitude is exceptional, and something which he is very modest about. Eloquent and fluid during his speeches, Ray Parlour is a fantastic football speaker; his instantly recognisable golden curls threw him up as a poster boy of 1990s football and his favourite status with the Arsenal faithful make him a Highbury icon.

A respected after dinner speaker and football speaker, Ray Parlour is sought after for a multitude of events and occasions. With his popularity ever increasing, don’t miss out on booking Ray Parlour for your event as a football speaker certain to be a magnificent addition and provide a thoroughly memorable and captivating performance.

When at corporate events, Ray is known to cover the following topics:

To book Ray Parlour to make a personal appearance at your corporate event, function or conference, simply contact the Champions Football Speakers agency by filling in our online contact form or by calling a booking agent directly on 0207 1010 553.