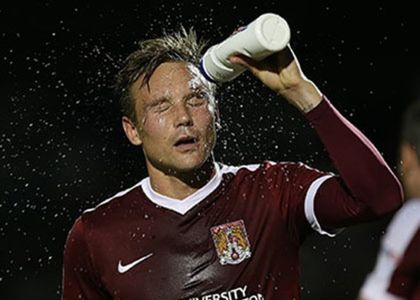 Matthew Taylor is an English professional footballer who plays as a midfielder for League One club Northampton Town. Taylor has previously played for Luton Town, Portsmouth, Bolton Wanderers, West Ham United and Burnley.

Taylor was born in Oxford however began his career at Luton Town, making his debut as a 17-year-old at the beginning of the 1999–2000 season. He soon made the left wing-back position his own and won the Young Player of the Season award in his first ever season as a professional, before winning the Player of the Seasonaward in 2000–01.

His impressive displays led to interest from a host of Premier League clubs, but he instead decided to sign for First Division team, Portsmouth.

Usually playing as a left wing-back in a 3–5–2 formation, his speedy breaks down the left flank in support of the attack were a feature of Portsmouth’s play as they won the First Division title in May 2003. As well as being an integral member off the team during the season, Taylor also scored seven goals in the League campaign.

Matthew Taylor picked up an injury in the latter stages of the First Division winning season meaning that Taylor was unavailable for the start of Portsmouth’s first Premiership season. After returning to full fitness, Taylor struggled to win his place in the side back due to the side’s good early season form however his determination and perseverance, qualities he speaks of as a football speaker meant Taylor eventually won a place in the Pompey team at left back, becoming a regular in the second half of the 2003–04 season. Taylor scored a memorable equaliser in an FA Cup tie at Anfield on 15 February 2004, when he ran the length of the pitch to celebrate with the supporters after a forceful right-footed finish at the Kop End.

New manager Alain Perrin utilised Taylor as a left midfielder during the 2005–06 season, during his tenure Taylor scored from 40 yards at Sunderland’s Stadium of Light, winning the BBC Goal of the Month award. Spotting the goalkeeper Kelvin Davis off his line, Taylor hit a dipping left-footed half-volley over Davis’ head and into the back of the net. Portsmouth had been trailing Sunderland 1–0 in the crucial “six pointer” but Taylor inspired a second half comeback with two goals and two assists in a 4–1 victory.

Upon Harry Redknapp’s returned, Taylor initially retained his attacking role but the arrival of Andrés D’Alessandro meant that Taylor returned to full-back for the latter stages of the season. 2005–06 could be considered Taylor’s breakthrough season as a Premiership footballer, played 34 league games, scoring six crucial goals which inevitably contributed to the clubs survival from relegation.

His good form for Portsmouth attracted interest from Tottenham Hotspur and Fulham, but he signed a long-term contract with Portsmouth in July 2006. In the 2006–07 season, Taylor was a regular in the Portsmouth side on the left of midfield.

Matthew Taylor went on to play for a host of other clubs before signing for Swindon Town where is currently playing. A player that has represented a number of clubs and has experienced many different environments and cultures within football allowing him to have and share a unique insight into the current workings of professional football in differing leagues. Available to hire as a football speaker, Matthew Taylor is certain to be a fantastic addition to any event providing a wonderful insight into the life of a current football professional.

To book Matthew Taylor to make a personal appearance at your corporate event, function or conference, simply contact the Champions Football Speakers agency by filling in our online contact form or by calling a booking agent directly on 0207 1010 553.