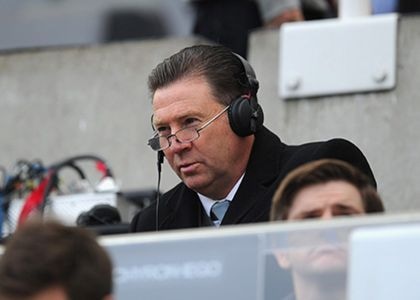 Football speaker and British legend Chris Waddle is known for his heart-breaking penalty miss against West Germany in the 1990 World Cup semi-final. With an extensive and prolific career playing for a number of British and European clubs, Waddle retired to become one of the most sought-after sports speaker in the UK.

Prior to becoming a dedicated football speaker Waddle played in the winger position for Sunderland, Burnley, Torquay, Tottenham, Newcastle United and – an unusual move for an English player – French team Olympique de Marseille, with whom he won the French Championship, Ligue 1 on three occasions.

Waddle’s time in Marseille saw him voted second best Olympique de Marseille player of the century behind Jean Pierre Papin for the club’s century anniversary in 1998. Whilst at the club he also again tried his hand at a pop music career, joining teammate Basile Boli in recording a song entitled We’ve Got a Feeling.

During a playing career that spanned over two decades, Waddle earned 62 caps for England and played in the 1986 , UEFA Euro 1988 and the 1990 FIFA World Cupin Marseille, the tournament and missed penalty Hoddle is often remembered for. Hoddle’s career saw him make 663 professional appearances and scored 126 goals.

Waddle was presented with a number of awards for his footballing prowess, including the Football Writer’s Footballer of the Year in 1993, whilst his popularity also brought him into contact with various other members of the media and public figures; he even contributed to the infamous 1990 World Cup anthem by New Order.

A punditry career followed after Chris’ professional playing retirement in 2000 from his final club Torquaybefore a few more seasons in Non-League football. Waddle appeared on BBC Radio Five Live as a summariser forPremier League,  matches along with writing a column in The Sun newspaper. Waddle signed a deal with Setanta Sports to commentate on all England away matches during the 2008–09 season. Waddle then went on to co-commentate for ESPN‘s English Premier League football coverage and is a pundit on Showsports Arabia, covering the English Premier League, from the studio in Dubai, UAE.

Waddle works as a sports speaker for both live events and journalistic broadcasts, his diverse and distinguished career both as a player and pundit have given Chris a fantastic knowledge database to be able to relate to and shed light on almost any sector of football

With his vast playing experience and the longevity of his public standing, Chris Waddle remains a hugely popular football speaker, he is available for hire for corporate events, award ceremonies, specialist sports functions and television and radio broadcasts. Named in the 1991 FIFA XI, a monumental achievement, Waddle is a personality and an inspirational figure who can give a rare insight into football as someone who still to this day plays semi-professional football. This alone allows him to comprehend the changes in football over the past few decades from pinnacle the pinnacle of football around the world to the current state of football. An enthralling football speaker, legendary speaker and phenomenal pundit Waddle is available to mesmerise guests at your event.

To book Chris Waddle to make a personal appearance at your corporate event, function or conference, simply contact the Champions Football Speakers agency by filling in our online contact form or by calling a booking agent directly on 0207 1010 553.