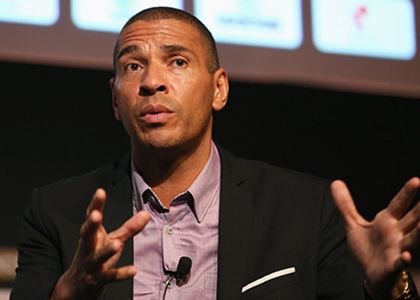 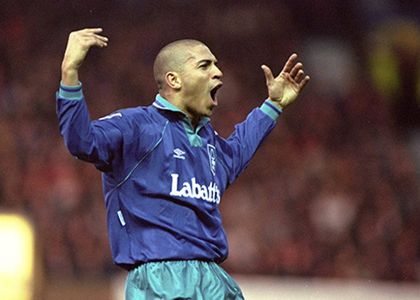 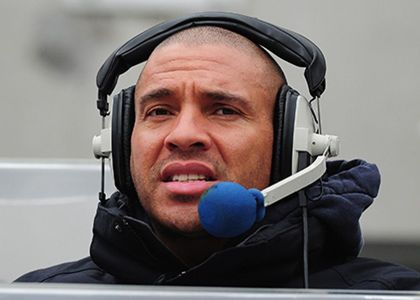 Stan Collymore is an English former footballer who played as a centre-forward from 1990 to 2001. He held the English transfer record when he moved from Nottingham Forest to Liverpool for £8.5 million in 1995 and was capped three times at senior level by the England national football team. He is currently a football pundit.

In June 1993, he signed for Nottingham Forest in an initial £2 million deal rising to £2.75 million based on certain clauses being met, including an international cap. He was signed by newly appointed Frank Clark, who had just taken over as manager at the end of Brian Clough’s 18-year reign as manager. Forest had just been relegated from the Premier League, but Collymore’s good form in the 1993–94 campaign helped take them back to thetop flight as Division One runners-up.

He scored 22 Premier League goals in 1994–95 as Forest finished third in the league and achieved UEFA Cup qualification to secure their first European campaign of the post-Heyselera.

Halfway through the 1994–95 season, Collymore came close to joining Manchester United. Alex Ferguson was looking for a younger striker to sign as a possible long term successor to the 31-year-old Mark Hughes, and had identified Stan Collymore and Andy Cole as the two players who best fitted the bill. For a while it seemed certain that Collymore was on his way to Old Trafford, but United signed Cole instead and Collymore remained at the City Ground until the end of the season, by which time Newcastle United, Liverpool and Everton were in the hunt for his signature.

Collymore signed for Liverpool in June 1995, for an English record fee of £8.5 million. He scored on his Liverpooldébut against Sheffield Wednesday and would spend two years at Anfield. He scored at a ratio of a goal every 2.5 games and created many goals in a partnership with Robbie Fowler, ousting the veteran Ian Rush. He scored two goals, including the winner, against Newcastle United at Anfield in a game that was regarded as one of the most exciting in the history of the Premier League – a game which helped severely dent Newcastle’s title challenge (which they had led by 10 points at Christmas 1995) and eventually hand the title to Manchester United. In 2003, it was voted by viewers of Sky Sports as the greatest sporting moment in the channel’s first ten years.

At the end of his first season with Liverpool, Collymore and Fowler’s partnership was one of the most feared attacking partnerships in the Premiership (having plundered 55 goals between them), while Collymore had also received an International call up. Collymore was in the Liverpool side for the FA Cup Final, but was substituted in favour of Ian Rush (in his final appearance for Liverpool) in the 74th minute with the match still goalless, and watched from the sidelines when Manchester United‘s Eric Cantona fired home the winning goal with five minutes left on the clock. It would be the closest that Collymore would come to winning a major trophy in his playing career.

Despite his controversies at the club, Collymore helped Liverpool to third place in the Premier League. After two seasons at Anfield the striker was sold to Aston Villa in 1997, for £7 million, making him Liverpool’s most expensive sale at the time, and Villa’s most expensive signing.

When he’s at corporate events, Stan is known to cover the following topics:

To book Stan Collymore as the football speaker for your corporate event, function or conference, simply contact the Champions Football Speakers agency by filling in our online contact form or by calling a booking agent directly on 0207 1010 553.