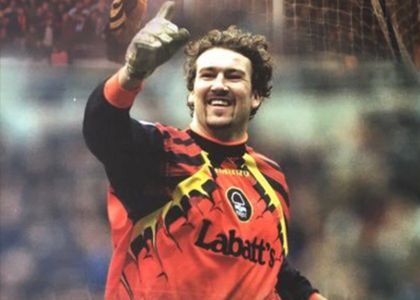 Mark Crossley is an English-born Wales international football goalkeeper, as a player, he has previously played for numerous clubs in England’s top flight, notably for Nottingham Forest. He is the only goalkeeper to save a Matthew Le Tissier penalty kick and he has also played for Manchester United, Milwall, Middlesbrough, Stoke City, Fulham, Sheffield Wednesday, Oldham Athletic and Chesterfield. Internationally he earned 8 international caps playing for Wales and 3 caps for England U21s.

Mark started his football career in 1987 as a trainee with Nottingham Forest FC before he had a loan spell at Manchester United during the 1989-90 season but was never selected for the first team, although he played several games for the reserves. Returning to Forest, Crossley was a huge favourite amongst fans, despite his tendencies to being prone to the occasional mistakes. Mark Crossley went on to make just under 400 appearances in thirteen years with the club, becoming first-choice ‘keeper at the start of the 1990-91 season. Crossley’s great ability to save penalty kicks means he remains as one of the only three goalkeepers to save a penalty in the FA Cup Final, a feat he achieved against Gary Lineker in 1991.

He was granted a testimonial match during the 1999–2000 season by Nottingham Forest, which was played in front of 15,000 supporters. He was finally released from Forest, against his will, in 2000 as the club’s financial troubles required them to reduce the wage bill. Mark joined Middlesbrough on a free transfer to provide competition as well as cover for the number one spot at the club. He made only 23 appearances in three years for Middlesbrough.

Frustrated by not playing many games at Middlesbrough, Mark joined Fulham for £500,000 in 2003 and made his debut against Wigan Athletic. He was mainly the second-choice goalkeeper during his time at the club, although he did have more opportunities to play in the first team during the 2005–06 season due to the sale of former number 1 goalkeeper Edwin van der Sar. These lack of opportunities meant former team mate and Sheffield Wednesday manager Brian Laws was able to make Mark his first signing in November 2006, bringing him in on loan. Mark impressed, with a string of fine performances and the loan deal was extended to the end of the season.

After being released by Fulham at the end of the 2006–07 season, Mark signed for League One side Oldham Athletic. He also took a coaching role at the club in search of a career path after playing. Mark signed a one year extension to his current contract, and was contracted at Latics until the end of the 2008–09 season. After the final game of the season, the club reported that he and the assistant coach had parted with the club.

In the summer of 2009 he joined Chesterfield as player and coach as part of John Sheridan’s new coaching team before being appointed as both a caretaker and later assistant manager at Notts County.

Mark was a regular in the Welsh international squad, but served as understudy to Neville Southall, and then Paul Jones. He started only eight games. His most memorable moment with the national team was Wales’ 4–0 win over Scotland. Mark is now proving a very popular ‘After Dinner Speaker‘ on the circuit with his very own unique style and impressions, including the legendary Brian Clough. His extensive experiences within football and the any teams he represented allow Crossley to provide a fantastic overview and insight into the world of professional football along with the intricacies and demands of the game. Mark Crossley is certain to be a fantastic addition any event as a football speaker and will provide a thoroughly entertaining performance.

To book Mark Crossley as the football speaker for your corporate event, function or conference, simply contact the Champions Football Speakers agency by filling in our online contact form. For any further information, call a booking agent directly on 0207 1010 553.