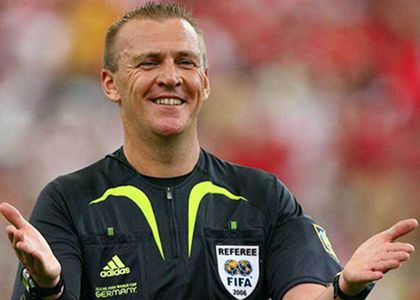 Graham Poll is a British football speaker and a former English football referee in the Premier League and is considered the best English referee of the last 25 years in a list maintained by the International Federation of Football History and Statistics(IFFHS). With 26 years of experience, he was regarded as one of the most prominent referees in the Premiership, often taking charge of the highest-profile games. His final domestic game in a career spanning 1,544 matches was the Championship play-off final on 28 May 2007. As well as refereeing the 2005 UEFA Cup Final he was the English representative at two World Cups and UEFA Euro 2000.

Poll took up the whistle in 1980, progressing from the Isthmian League to become a Football League assistant referee in 1986. Five years later he became a full Football League referee, before being selected for the list of Premier League referees in 1993. Having held a FIFA badge since 1996, he took charge of quite a few European and International matches.

In a career often plagued with controversy and claiming headlines as the referee, Poll was renown for his decision in the dying seconds of the Merseyside derby between Everton and Liverpool on 21 April 2000 with the score at 0–0, the Liverpool goalkeeper kicked the ball into Don Hutchison's back while Hutchison was retreating towards his own half. The ball bounced into Liverpool's net, but Poll disallowed the goal, claiming that he had already blown the whistle to end the game. The television slow-motion pictures proved that this was incorrect, and after retiring in May 2007, Poll confessed that disallowing the goal had been a mistake that he regretted.

Poll's most famous controversy however came at the 2006 FIFA World Cup, in his third game, Croatia vs Australia, he cautioned the same player three times before sending him off resulting in huge criticism after the game. Poll retired from refereeing international tournament finals matches, citing his error in the match. Both of these incidents are ever present in Poll's performances as a football speaker and are fascinating, providing the knowledge of the scrutiny present in football and officiating while providing great humour through his wonderfully light hearted delivery as a football speaker.

With a long and largely successful career Poll remains working within the football industry as a sports speaker and pundit. Often called upon to provide a referee’s perspective Poll has worked as a football speaker on BBC Radio, Mark Chapman’s football podcast, Chappers Premier League Podcast, and popular radio show World Soccer Daily. As well as working as a football speaker, Poll has contributed to a number of print publications, including regular submissions to the Daily Mail in which he commentates on and discusses the role and decisions of referee’s in both past and present games.

As one of the most respected referees of recent years Graham Poll draws large crowds to his presentations as a football speaker, he is known for his detailed insight into a much under-publicized aspect of football and his status as arguably the best English referee of his generation marks his commentary above all others. A rare insight into the mind and life of one of English footballs greatest officials, an event with Graham Poll as a football speaker is one not to be missed as he provides a detailed and unparalleled insight into the world of football and the role of a referee.

To book Graham Poll to make a personal appearance at your corporate event, function or conference, simply contact the Champions Football Speakers agency by filling in our online contact form or by calling a booking agent directly on 0207 1010 553.