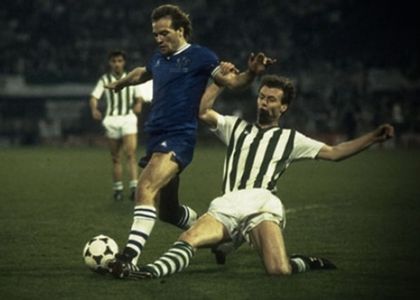 Ex-International Footballer and renown football pundit, Andy Gray, is available to be a football speaker at your event. Having been a focal figure on Sky Sports for over two decades as a pundit and analyst, Gray has outstanding footballing knowledge.  Having plied his trade for a number of teams across England and Scotland, as well as amassing 20 caps for Scotland, Gray turned his attention to punditry and football analysis during the early 1990’s after retiring.

A glittering professional career in which he scored 185 goals, Gray played for Aston Villa, Wolverhampton Wanderers and Everton amongst others, and led to two League Cups, an FA Cup, a European Cup Winners’ Cup, a Scottish Premier League and, last but not least, an English championship title.

After retiring as a player in 1990, Andy became a football commentator, pundit and analyst on Sky Sports. He served as a highly recognisable facet of its Premier League coverage since its inception in 1992, most notably alongside studio anchor Richard Keys. The pair formed a dynamic partnership which generated huge success and popularity captivating and entertaining audiences around the globe.

Alongside his work on Sky Sports, Gray has featured on BBC Radio 5 Live for the 2002 World Cup, ESPN for the Euro 2008 tournament along with providing tips for bookmaker, Betfair. His distinct voice resulted in him doing commentary for EA Sports flagship videogame series, FIFA.

A speaker who has witnessed and experienced numerous facets of the sport and events around the world, Gray has many a tale to tell as a football speaker with fond memories alongside controversy such as the widely reported one that curtailed his illustrious time with Sky Sports.

A fond favourite among football fans, experienced media personality and extremely entertaining speaker, Andy Gray presents the perfect choice to be a football speaker at your event. With a multitude of hilarious anecdotes and cutting-edge mockery, he will be a fabulous addition to your football event.

Heralded the ‘voice of football,’ Andy Gray was awarded The Royal Television Society’s Sports Presenter of the Year as testament to his punditry and presentation prowess within the industry. An admired figure with an abundance of knowledge and value to add to your event, a football speaker with a phenomenal personality, Gray will capture the imagination and attention in an extraordinarily entertaining manner as a football speaker.

To book Andy Gray to make a personal appearance at your corporate event, function or conference, simply contact the Champions Football Speakers agency by filling in our online contact form or by calling a booking agent directly on 0207 1010 553.

To book Andy Gray to make a personal appearance at your corporate event, function or conference, simply contact the Champions Football Speakers agency by filling in our online contact form or by calling a booking agent directly on 0207 1010 553.