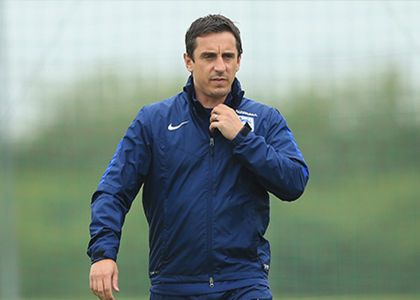 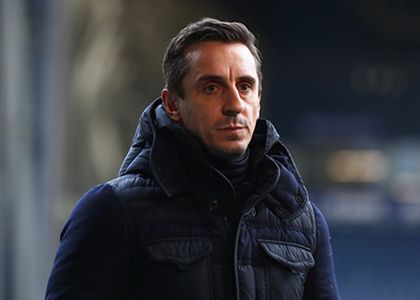 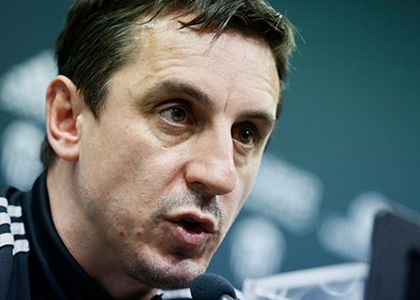 Gary Neville is a former English football player and manager who until recently served as assistant manager for the England national team, and is a co-owner of Salford City. Since retiring from football in 2011, Neville went into punditry and was a commentator for Sky Sports until he took over the head coach position at Valencia. After being sacked by the club in 2016, he returned to his position as a pundit for Sky Sports later that year. A prolific defender Gary Neville is England’s most capped right-back having achieved 85 senior caps before retiring from International duty in 2007.

Former Manchester United captain, Neville made 400 appearances for his only club having risen through the youth ranks. A member of the famous youth team that included David Beckham, Ryan Giggs and Neville’s brother Phil, Gary has ensured life after professional football is still fruitful by becoming part of the England Senior squad coaching staff as well as undertaking a punditry role with Sky Sports. As well as his prior engagements, Gary Neville has forged a reputation as a popular after dinner speaker and football speaker at a range of events.

Neville joined Manchester United as an apprentice upon leaving school in 1991, and captained the youth side to FA Youth Cup glory in his first season. He made his senior debut for United in September 1992 against Torpedo Moscow in the UEFA Cup. Neville emerged as part of Alex Ferguson's youth-oriented side of the 1990s that included his brother Phil, Ryan Giggs, David Beckham, Nicky Butt and Paul Scholes. In the 1994–95 season, Neville became United's first-choice right-back when Paul Parker was ruled out by injury, and remained so until his retirement some 19 years later. Appointed Club captain in November 2005 after the departure of Roy Keane.

A real work horse, Neville is renowned for giving 100% into everything he does; a one club man he has displayed his honourable qualities and is passionate for what he loves and believes in- perfect attributes for a football speaker. A favourite football speaker for many, Gary Neville’s commitment and dedication to his sport has seen him win a multitude of accolades with Manchester United including 8 Premier League titles and 2 Champions League trophies. An intellectual individual who has the ability to encapsulate his career and experiences expertly as a football speaker, Gary Neville’s attendance at your event or occasion as a football speaker will ensure it lives long in the memory of guests and attendees.

Cited as one of the best pundits currently on television, Gary Neville has enjoyed real success with Sky Sports as part of their ‘MNF: Monday Night Football’ coverage. Joining forces with old adversary Jamie Carragher, Gary Neville’s analysis of football is impeccable; his ability to pick and examine aspects of football is phenomenal, a skill which reinforces his superiority as a football speaker.

Neville was appointed to the England senior team coaching staff by newly appointed manager Roy Hodgson and continued to work as assistant manager of England through the 2014 World Cup and subsequent Euro 2016 qualifying campaign. Gary Neville was appointed as head coach at Valencia in Spain on 2 December 2015. Neville's brother Phil had previously been caretaker manager and continued to work with his brother at the club; Neville also retained his England assistant coaching role while at Valencia. The decision to hire Neville was met with much surprise in Spain, due to his lack of prior experience, and as he was not fluent in Spanish. Having started with a sequence of nine winless league matches and being sent to the stands leading to criticism from the press as well as the club's fans, who called for him to resign. After just 3 months Neville was sacked by Valencia, at the time of his sacking, Valencia were 14th in the league, only six points clear of the relegation zone, and had won only three of their 16 league games under Neville, also failing to keep a single clean sheet.

In 2014, it was announced that Neville, along with fellow Manchester United legends Ryan Giggs, Paul Scholes, Nicky Butt and Phil Neville, had agreed a deal to purchase Salford City ahead of the 2014–15 season with the mission to get the club to The Football League. Salford obtained promotion in their first season, as documented in the Class of 92 television programme for the BBC. A hotelier and columnist, Neville also holds a number England records, breaking the record for a right back and His 11 appearances for England in the European Championship finals (over three tournaments) is a record. Gary and his brother Phil also hold the record of England's most capped brothers and The Neville’s hold outright the record for the most appearances in the same England team by a pair of brothers.

A player, manager, pundit and columnist, Neville personifies passion, dedication, honesty and integrity coincided with his true love of the game, words which describe Gary Neville perfectly. His ability as a football speaker is impeccable and his attendance at your event is sure to raise its profile. One of the most decorated English and European footballers of all time, having won a total of 20 trophies, Gary Neville is sure to be an incredible addition to any event as a football speaker providing a truly unique and mesmerising account of a glittering and distinguished career within football.

To book Gary Neville to make a personal appearance at your corporate event, function or conference, simply contact the Champions Football Speakers agency by filling in our online contact form or by calling a booking agent directly on 0207 1010 553.