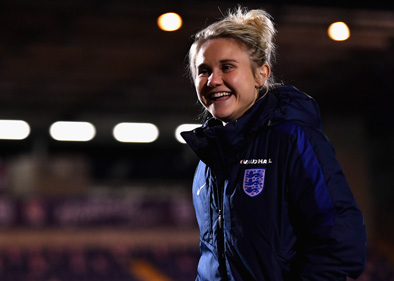 Isobel Christiansen is an Olympique Lyon midfielder and forward player, she is also a member of the England National Team.

Beginning her career as captain for the women’s football club at the University of Birmingham, Izzy progressed in her football career to play for Everton and Birmingham City in the UEFA Women’s Champions League.

In 2014, Christiansen signed for Manchester City Women and scored the only goal to help her team win the FA WSL Continental Cup. Her performances with Man City meant that she won two PFA Women’s Players’ Player of the Year as well as the PFA WSL Team of the Year. It was only recently in 2018 that Izzy signed to Olympique Lyon for two years.

Representing England at a junior level, Christiansen’s squad won the 2009 Under 19 European Championship and came runners up in the following competition. She also played at the 2008 Under 17 and 2010 Under 20 World Cups as well as winning a gold medal in the 2013 Summer Universiade, her performance here lead to her promotion to the senior England team.

Scoring a goal towards England’s 8-0 win in her senior international debut at the UEFA Women’s Euro qualifying match against Estonia, Isobel showed dedication and valued sportsmanship to the squad since day one.

As she received surgery on her ankle due to an injury sustained during the 2019 SheBelieves Cup, it is hoped by England coach Phil Neville that she recovers in time for the 2019 FIFA Women’s World Cup as she is considered a vital member of his squad.

To book Isobel Christiansen to make a personal appearance at your corporate event, function or conference, simply contact the Champions Football Speakers agency by filling in our online contact form or by calling a booking agent directly on 0207 1010 553.