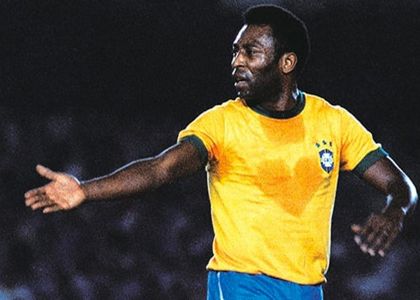 Possibly the greatest player to ever walk the planet, Pele, is a South American superstar who was the world’s most famous and highest-paid athlete in world. The epitome of a legend, Pele will forever be respected and appreciated as one of the greatest talents to grace the game of football. The World Player of the Year and Athlete of the Century truly is and forever will remain a footballing icon. The winner of the coveted Ballon d’Oron seven occasions, few will ever have a legacy like the great Pele.

Edson Arantes do Nascimento was born to a poor family, in Tres Coracoes, Brazil. He began playing for a local minor-league club when he was a teenager and made his debut with the Santos Football Club in 1956. Nicknamed Pele, the Hebrew word for miracle, he played as inside left forward guiding the team to several South American Clubs’ Cups and the 1962 World Club Championship in addition to three World Cupchampionships. Pele led Santos Football Club to an incredible 24 titles and trophies during his time at the club.

Pele scored his 1,000th goal in 1969, the legendary athlete retired in 1974 but made a comeback soon after in 1975 after accepting a reported 7-million-dollar contract for three years with the New York Cosmos of the North American Soccer League. He stated that he came out of retirement not for the money, but to “make soccer truly popular in the United States.” His farewell appearance came against his beloved old club Santosin 1977.

Pele, became a Brazilian national hero and was also affectionately known as Perola Negra (Black Pearl). An average-sized man, he was blessed with speed, great balance, tremendous vision, the ability to control the ball superbly and the ability to shoot powerfully and accurately with either foot and with his head. In his career he played in 1,363 matches and scored 1,282 goals. His best season was 1958, when he scored 139 times. In addition to his accomplishments in sports, he published several best-selling autobiographies, starred in several documentary and semi-documentary films, and composed numerous musical pieces, including the entire sound track for the film ‘Pele’ (1977). He was the 1978 recipient of the International Peace Award and in 1980 he was named the Athlete of the Century.

The three time World Cup winner, Pelé was appointed a UNESCO Goodwill Ambassador along with being named as Extraordinary Minister for Sport in Brazil. Pele received an honorary knighthood from Queen Elizabeth II at a ceremony in Buckingham Palace. A global personality, Pele has helped and influenced many lives and has contributed extensively to charities around the world and those less fortunate.

A Guiness World Record Holder for the most goals scored in football, Pele is heralded by his experts, fans and peers as the greatest of all time. The accolades and plaudits will forever continue for a man who is truly a once in a lifetime footballer. The man said to defy logic and bare comparison to God, Pele is a legend and quite possibly the closest the world will ever see to perfection within football, available to hire for any event as a football speaker, Pele is certain to be an unforgettable addition to any event.

To book Pelé to make a personal appearance at your corporate event, function or conference, simply contact the Champions Football Speakers agency by filling in our online contact form or by calling a booking agent directly on 0207 1010 553.