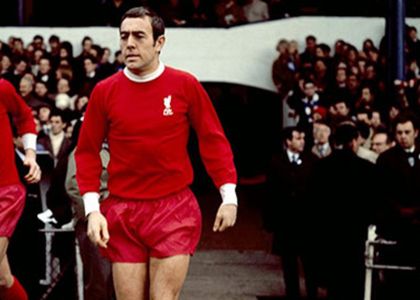 Scottish footballer, football speaker and pundit Ian St. John has had a long and diverse career in the football industry; beginning life as a player for his home town team of Motherwell, St. John went on to play for Liverpool for ten years and then, following his retirement in 1973, Ian turned his hand to management and became the manager for Motherwell and Portsmouth.

Having begun his playing career at Motherwell, St. John’s transfer to Liverpool was later cited by then manager, Bill Shankly, as the turning point of the club to develop and transform into a force in European football. Scoring a hat trick on debut for the club against Merseyside rivals, Everton, St. John instantly captured the hearts of Liverpool fans and gave a sense of what was to come. St John was brought in to turn around Liverpool’s luck as they had finished 3rd or 4th six times in a row in Division 2 thus missing out on promotion back to the big time by a single spot on each occasion. The purchase paid dividends as Liverpool romped to the 2nd Division title by eight points over Leyton Orient with St John playing 40 times scoring 18 goals. St John played a major role in the title success appearing 40 times scoring 19 goals as Liverpool won the League Championship in just their second season in the top flight. Ian scored many vital goals for Liverpool during his time with the club, which notably included the flying, whiplash header that he hammered past Leeds United’s Gary Sprake to win the FA Cup in 1965, for the first time in the club’s history.

Another League Championship followed in the 1965–66 as Liverpool finished six points clear of Leeds. St John chipped in with 10 goals in a campaign that would be his last successful venture with the club before leaving to briefly play for Coventry City and Tranmere Rovers. An illustrious domestic football career coupled with 21 international appearances for Scotland make for an intriguing and compelling performance at any event at which Ian St. John is the football speaker.

Despite spending of a brief portion of his extensive career as a manager St. John used the success of his playing and management career to gain a respectable and high-profile position as a football speaker and pundit. Probably best known for his work on Saint and Greavsie, alongside fellow player turned sports speaker Jimmy Greaves.
Running for seven years Greaves and St. John’s sports speaker partnership was one of the most popular on British television. This experience as a television presenter and football speaker provided Ian St. John with an excellent foundation upon which to build his career as a football speaker; his experience as player, managerand pundit provided him with a wealth of tales and anecdotes to share with his audiences and a fascinating knowledge and insight into the beautiful game.

Alongside his work as a football speaker Ian St. John has established a series of footballing academies to train young and aspiring footballers. In June 2014, he announced that he had undergone surgery for bladder cancer in April of that year, removing his bladder and prostate gland. In a career and life full of both huge success and trials and tribulations, Ian St. John provides a truly informative and entertaining account as a football speaker sharing his knowledge and experience from his performing footballing career along with hugely entertaining stories of his ventures outside of football. Ian St. John truly is a wonderful football speaker perfectly suited to any event.

To book Ian St John to make a personal appearance at your corporate event, function or conference, simply contact the Champions Football Speakers agency by filling in our online contact form or by calling a booking agent directly on 0207 1010 553.

To book Ian St John to make a personal appearance at your corporate event, function or conference, simply contact the Champions Football Speakers agency by filling in our online contact form or by calling a booking agent directly on 0207 1010 553.