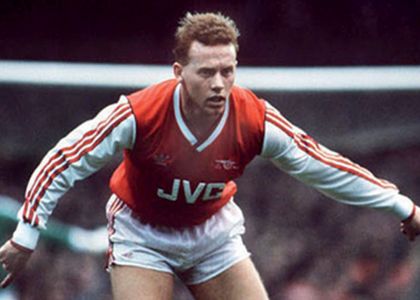 One Of The Most Recognisable Arsenal Players Of All Time

Perry Groves is one of the most recognisable former Arsenal players of all time. As a player, Groves was a fast-paced player who usually played as a winger, and occasionally as a striker, following his retirement, Perry Groves now works as a football and media pundit.

Groves began his footballing career as a young schoolboy when he had a trial for Wolverhampton Wanderers FC in 1981. Immediately spotting the talent which Groves possessed, Colchester United offered him a position as an apprentice. Just a year later, Groves turned professional and went on to play a staggering 142 league games, scoring an 26 goals along the way.

Perry Groves was accumulating a great following and there was a lot of excitement and interest in the young winger. In 1986, Perry Groves signed for Arsenal for a fee of £50,000 and was the first signing under new manager George Graham. In his first season at Arsenal, Groves made an immediate impact and his most important moment came when he helped set up Charlie Nicholas for the winning goal in the 1987 League Cupfinal, dribbling past three Liverpool players before laying the ball off for the winner. This was a truly victorious and prestigious moment for Groves and just one of the many brilliant highlights of his footballing career and one he often speaks of at events where he is a football speaker.

Noted for his enthusiasm and hard work, Groves started the majority of Arsenal games during the 1987-88 season and helped Arsenal to reach another League Cup Final the following season, scoring the only goal in the semi-final against Everton.

Groves also played regularly in the famous 1988-89 season and helped produce the decisive goal that meant Arsenal would go on and win the league. Arsenal also won the title the season after, again.

Perry Groves played a huge part in the team’s success and was an integral part of the glories that season. Following this time of tremendous success, Groves moved to Southampton for a staggering £750,000 and continued to develop as a professional football player before a serious injury cut his playing days short. This sudden fatality and the emotional strain that it caused is a topic which Groves sheds light on as a football speaker, he discusses the way things can change in life and football in and instant and the determination and resilience required to combat such adversity.

Still regarded as a footballing legend by Arsenal, Perry Groves makes a brilliant football speaker using his tremendous motivational and inspirational stories. Groves shares his most personal and intimate experiences and triumphs, whilst interacting with audience to ensure the event is thoroughly enjoyed by all.

Groves has worked with many footballing organisations including Sky Sports, Radio 5 Live and BT Sport as a pundit providing a fascinating insight and perspective from him abundance of knowledge. Groves has also attended Arsenal Legends charity matches and London Masters matches to which he has been honoured by football fans of all clubs.

Perry Groves is one of the most level headed and disciplined football speakers there is and makes a brilliant motivational speaker for all manner of different events. An incredibly popular and affectionate personality, Perry Groves is certain to resonate with any audience and be a wonderful addition to any event as a football speaker.

When at corporate events, Perry is known to cover the following topics:

To book Perry Groves to make a personal appearance at your corporate event, function or conference, simply contact the Champions Football Speakers agency by filling in our online contact form or by calling a booking agent directly on 0207 1010 553.