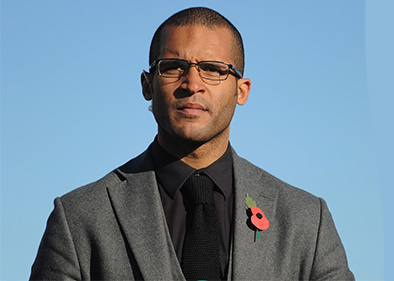 Born in Preston, Clarke Carlisle took inspiration from his semi-professional footballer father and became involved with the sport at a young age. At youth level, Carlisle played for his home county of Lancashire before making his Football League debut with Blackpool. In 2000, Clarke moved to Queens Park Rangers and while with the club won three caps for England under-21 national team in the same season.

Carlisle missed a number of matches for Queens Park Rangers largely due to a posterior cruciate ligament injury which at one stage led doctors to believe that his career was over. This shocking revelation is something Clarke speaks of as a football speaker as he discusses the psychological battle that followed. He then missed one month of the 2003–04 season because of an alcohol-related problem, and left Queens Park Rangers at the end of that season. In the summer of 2004, he joined Leeds United on a free transfer looking to reignite his playing career.

Carlisle spent just one season with Leeds United before signing for Championship club, Watford. During the 2005–06 season, his first with Watford, the team finished third in the division and achieved promotion to the Premier League via the ever eventful play-offs. This victory is somewhat of a highlight for Carlisle and an achievement he is tremendously proud of and reminisces on as a football speaker. However, a thigh injury caused Carlisle to miss the majority of the team’s season in the top flight.

In March 2007, following his return from injury, Clarke had a one-month loan spell at Luton Town before Burnley manager Steve Cotterill bought Carlisle from Watford for a transfer fee of £200,000. In the 2008–09 season, he played over 40 matches as Burnley reached the semi-finals of the League Cup and finished fifth in the league, earning a place in the playoffs. Carlisle was named man of the match for his performance in the play-off final as Burnley beat Sheffield United 1–0 to return to the top tier of English football for the first time in 33 years. Once again Clare Carlisle proved to be a fundamental component of a promotion-winning campaign highlighted by the accolade of man of the match in the final. After being written off by many, Clarke Carlisle reflects on how satisfying that promotion and man of the match accolade was in showcasing his ability to deal with adversity and setbacks, a vital skill that is relatable to all walks of life.

An imposing figure in the centre of defence thanks to his stature, Carlisle also provided an attacking threat from set pieces during his career. Following a number of loan spells, Clarke Carlisle announced his retirement from playing in on the 23rd of May 2013.

Carlisle is a devout and practising Christian and regularly attends church. He attended Balshaw’s Church of England High School where he attained 10 A-grades at GCSE and studied mathematics and politics at A-level and in 2002 was awarded the title of “Britain’s Brainiest Footballer” in a TV game show. He has been an ambassador for the Kick It Out campaign and is a former Chairman of the Management Committee of the Professional Footballers’ Association. Carlisle has suffered from recurring problems with alcohol and depression, something he speaks of as a football speaker and a topic that is relatable to many in all walks of life. Clarke has also appeared on Countdown, Question Time and documentary, Is Football Racist?further enhancing his credentials as a footballing personality.

A highly intellectual personality, Clarke Carlisle enjoyed a diverse career in football and has developed a host of tales and anecdotes to share with his audiences as a guest. Often speaking of the requirements to succeed in professional football, Carlisle also covers topics such as dealing with adversity and hardship during his incredibly engaging performances, captivating the audience through his incredibly relatable content. Widely acclaimed as Britain’s Brainiest Footballer, Clarke Carlisle is available to hire as a football speaker for any event or function.

When at corporate events, Clarke Carlisle is known to cover the following topics:

To book Clarke Carlisle to make a personal appearance at your corporate event, function or conference, simply contact the Champions Football Speakers agency by filling in our online contact form or by calling a booking agent directly on 0207 1010 553.